Silver yuan, originating in the 15th century, was first cast in Europe and introduced to China in the 16th century. It was started to be cast during the reign of emperor guangxu, but it was not until the period of the republic of China that a large number of silver COINS were officially issued as national COINS. Over the past 100 years, there have been more than 1,000 kinds of silver COINS in circulation in China, and more than 10,000 kinds of silver COINS have been published in China. It can be said that it is a "big family" of modern currencies. 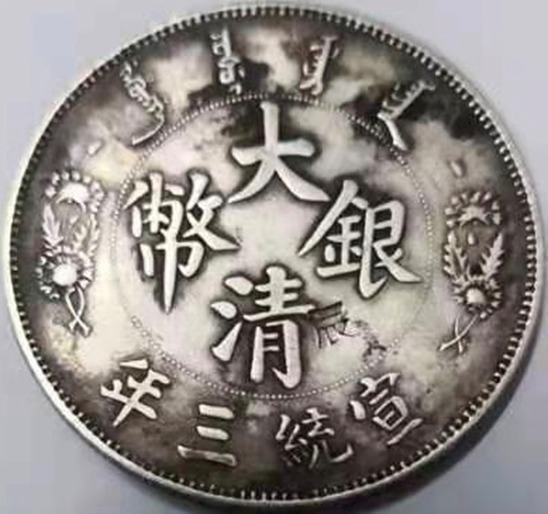 At the end of the reign of emperor guangxu of the qing dynasty, the qing government tried to rectify the confusion of the monetary system caused by the scattered coinage, so it was devoted to the arrangement and reform of the monetary system. In addition to specifying that the coinage power was uniformly vested in the central government, the coinage style, unit, weight and finish were also worked out in detail.

Xuantong three years of the qing dynasty silver coin, is the product of the late qing dynasty currency system reform, edition is not multi-style, innovative design, excellent production, calendar for coin lovers treasure collection. Xuantong three years of silver COINS have different formats, among which the long bearded dragon, short bearded dragon, big tail dragon are relatively rare. But has not been issued on the encounter wuchang uprising, only "qu xulong" issued, the rest of the majority is the sample currency.

This silver coin of Qing Dynasty is the silver coin of Xuantong for three years. The Chinese character "Qing Silver Coin" is inscribed on the front central bead circle, the Chinese character "Qing Silver Coin" is inscribed on the upper end outside the bead circle, and the Chinese character "Xuantong for three years" is inscribed on the lower end. On the back of the silver coin, a bearded dragon circling in a ring and a large cloud are inscribed, with the value of "ONE DOLLAR" inside and the English word "one dollar" at the lower end. This coin is elegant and handsome in character, magnificent in atmosphere, natural in patina, exquisite in casting, deep in mold, sharp in internal teeth, deep and clear in dragon pattern on the back, brilliant in colorful silver light on the front, dazzling in satin of dragon figure, perfect in appearance, smooth in surface and high in glossiness. It is a rare and precious silver coin, which is a model of central coinage in Qing Dynasty.

Dragon is an ancient Chinese legend has scales and claws and can make wind as rain of the supernatural animals. For thousands of years, as the symbol of the Chinese nation, the dragon has been worshipped by hundreds of millions of its descendants. Finding traces of dragons on COINS that are symbols of wealth is one reason why collectors like qing COINS.

In recent years, thanks to the increasingly flexible trading market, the ever-expanding collection of COINS, and the rediscovery of more folk COINS, the price of silver yuan has been rising all the way, becoming the focus of many buyers.